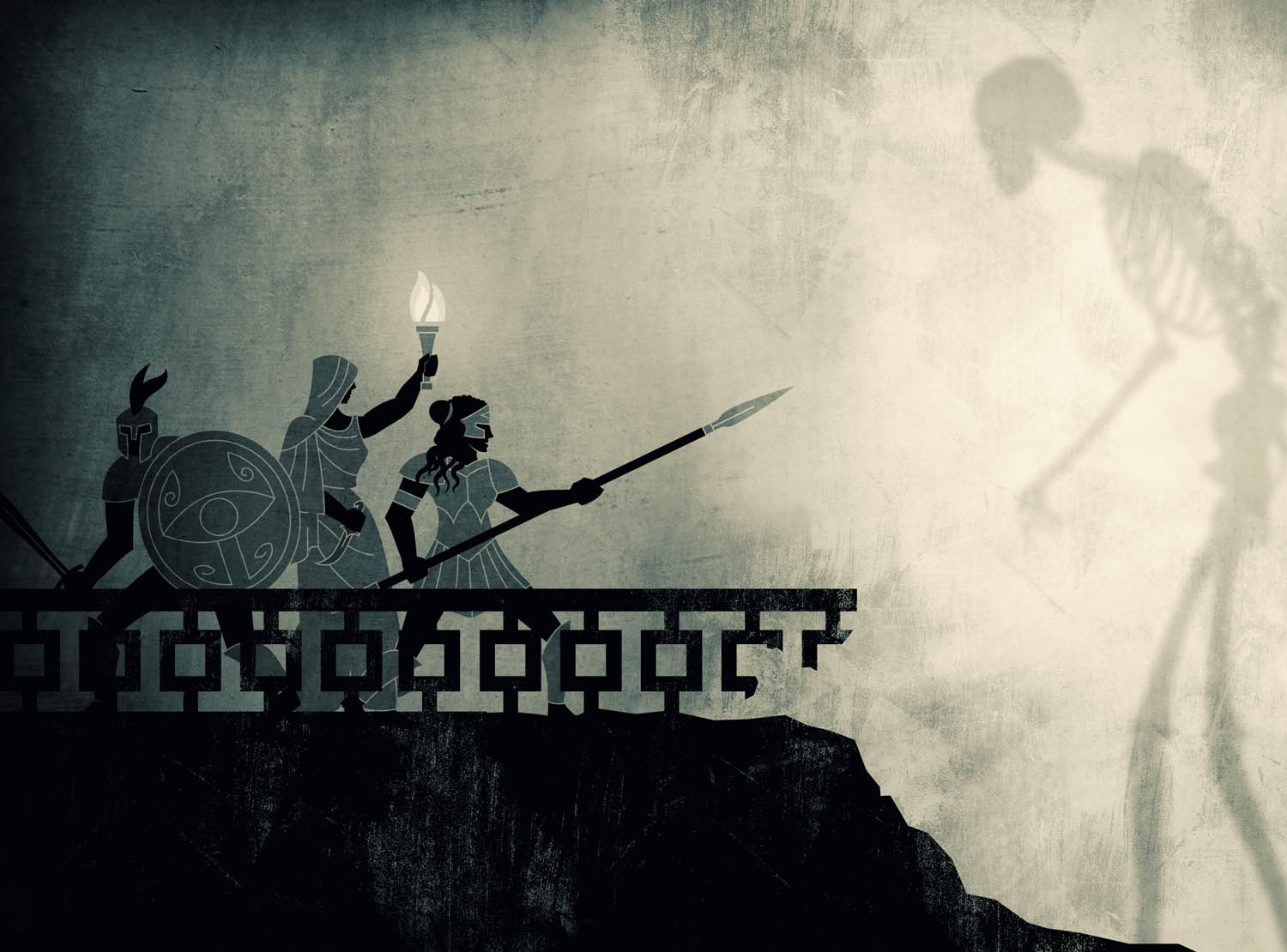 Far back in the mists of antiquity, a poet sings of great deeds wrought by mighty heroes—of monsters slain and justice restored, of wise council and devious strategies, of courage, valor, and daring—defiant of the gods themselves.

Far back in the mists of antiquity, a poet sings of great deeds wrought by mighty heroes—of monsters slain and justice restored, of wise council and devious strategies, of courage, valor, and daring—defiant of the gods themselves. In Agon, you create and play these heroes, crafting their epic tale into an immortal legend.

On their way back home from the war, the heroes have become lost among strange islands populated by mythical creatures, dire beasts, treacherous landscapes, legendary kingdoms, and desperate people—all somehow cursed or abandoned by the cruel power of the capricious gods.

It falls to you to seize this opportunity for greatness—to set things right in these lost lands, overcome the trials of gods, monsters, and people, prove the glory of your name, and win your way back home.

In this book, you’ll find:

The Trials of Glory Await!

Agon is a 160-page hardcover book and/or PDF with full color interior. The digital PDF version is included with the hardcover at no additional cost.

The PARAGON SYSTEM is a tabletop roleplaying game system found in the AGON rpg. The core system is adaptable to a variety of settings and premises with only a few key changes, as shown here in this document, which is called a “playset.”

To make your own PARAGON SYSTEM playset, you can use this document’s format as a template for the elements to include, along with the associated character sheet.

Playsets may not reproduce any material from the AGON rpg book, but you may refer to those mechanics and provide references to page numbers as needed. Our goal is for players to use the AGON game book as the primary system document, with playset materials acting as supplementary content to extend the usefulness of the core rules — sort of like DLCs or re-skins for a video game.

If you want to publish your own playset material for the PARAGON SYSTEM, go to agon-rpg.com for more information.

The year is 1968. Two years ago, on January 7, 1966, an alien energy, now known as THE SIGNAL, reached the Earth. It spread through telecommunications systems, affecting people and technology around the globe. Its existence is not publicly known, though its strange effects have been widely reported.

You work for CHAMBER — a secret agency tasked with capturing or destroying Signal Resonant Materials (SRMs) — objects imbued with THE SIGNAL — as well as containing its transmission and dealing with people harmed by it (or working to harness its power).

It is 1984 and the Earth is under attack from a silent invader.

EMPERIONS, mechanoids from the MetalWarp dimension, use their Gravimetric Beacons to launch INCURSIONS into our reality. Emulating our technology they hide among us, slowly siphoning Earth’s natural resources to fuel their conquest of MetalWarp and fulfill an ancient prophecy of destruction, THE SURGE.

Humanity as we know it would perish if not for their own champions—rogue Metalwarp defenders who have pledged to protect the earth from INCURSIONS by their own kin—the SURGE PROTECTORS!

You are a stormcraft fighter pilot serving aboard the Storm Carrier TEMPEST—the last surviving vessel of humanity since the devastation of the solar system by the Forged and the creation of the Storm in its wake.

TEMPEST depends on you, as a member of its Fury Squadron, to patrol the devastated solar system known as the Storm, secure resources , explore ruined worlds and render aid to the survivors, and fight back against the menace of the synthetic Forged.