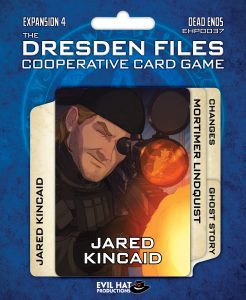 We’ve got new expansions for the Dresden Files Cooperative Card Game, and that means more of Shannon Appelcline’s excellent strategy guide! If you’re struggling with the new decks or just looking for a little advice to get you started with them, we’ve got what you’re looking for! And if you somehow missed the rest of the articles, we’ve got a handy link to the rest of the series at the bottom of this article. We’ll be hitting Expansion 5 on Thursday! So, without further ado…

You knew Kincaid wasn’t going to be a diplomatic guy. He’s all about hits, hits, hits.

Cards of Note. “Tripwire” is a great card. For 4 Fate it can deliver an unthinkable 6 Hits, and its targets can be quite far away … but it requires legal Foes at the shortest range in both rows to be efficient, else it’s probably better to discard for Fate. Generally, Kincaid has great range, with all but two cards working at range 2 or better. That’s why “The Archive” is pretty nice too: though it only delivers an average of 4 Clues for 5 Fate, it does so at range 5!

Best Suit [Attack: 16]. Kincaid has the best suit in the game, with four Attack cards totaling 16 Fate, but perhaps that’s due to a last-minute rebalancing of the “Snap Shot” card, because Kincaid is also the only character to have 31 Fate worth of cards in his deck instead of 30. Of the Attack cards, “Head Shot” has a great Fate:Hit ratio with a Range of 2; “Snap Shot” and “Sniper Rifle” are a bit costly for their damage … but they have a Range of 4, which is spectacular for an Attack. Count on being the guy who finishes off things at Range.

Talent: Cover Fire [Any Time but Late Game]. Store 1 Hit. Kincaid’s Talent allows for precision, because it can be used to later do +1 Hit, usually on an Attack that’s oh-so-close to killing something. This can be particularly helpful if someone is making an Attack with variable damage, because Kincaid can help push the damage upward when the dice roll badly. Note that Kincaid’s stored Hits can be used on anyone’s turn, which is otherwise unknown for a Talent. The catch is that you can only apply +1 Hit per Attack, so don’t store up too many Hits or they might end up wasted. Have Kincaid make Fate early, so that the extra Hits are immediately available, and definitely don’t have him make Fate Late, or his last Hit might not be playable. [See Also Mortimer: Store 1 Clue.]

Stunt: Isolate & Eliminate [Mid to Late Game]. +3 Hits to Hurt Foe & Swap. Kincaid’s Stunt is almost as good as Harry’s, since it does 3 Hits to a damaged foe. Note that it has three limitations. First, the Foe already has to be Hit. Second, there must be a second Foe. Third, the two involved Foes are swapped. Note that the swapping occurs even if the Hit Foe is eliminated. This is actually a great thing, as it allows Kincaid to eliminate a Foe and then bring in a distant enemy, so try and plan for it. (Kincaid’s alternative is to just swap two Foes who are both near in, which isn’t as useful.)

Team Notes. Depend on Kincaid to damage your Foes. Whenever you’re considering delivering Hits, think about whether a Cover Fire of +1 Hit would be helpful to finish off the Foe, and either ask Kincaid to apply the Hit or if he doesn’t have extra Hits stored, wait and ask him to use his Talent so that he can apply the Hit on a future turn. Also, work carefully with Kincaid to determine how his Stunt can be best used, because its ability to change the Range of a Foe can be quite powerful … and also quite problematic if used incorrectly.

Mortimer is focused on investigation, but otherwise has some good variety.

Cards of Note. “Sir Stuart” is Mortimer’s most notable card because it takes an Advantage at up to Range 3 and simultaneously can take an adjacent Obstacle, which could be at Range 4! Since distant Obstacle placement can be one of the most painful problems in DFCO, this can be a real boon in an unlucky setup … but less useful otherwise due to the high cost. It feels like “Angry Ghosts” should be a great card because it does 3 Hits plus one more per solved Case … but many Books don’t have a lot of Cases, and they’re often not solved until late in the game, so it’s actually hard to get this up to 4 Hits, which would deliver a 1:1 Fate:Hit ratio, let alone higher. It might actually be a good choice for a discard.

Best Suit [Investigate: 14]. Mortimer can deliver up to 12+1DF Clues to Investigations, but other than that his Investigate cards aren’t that notable, except for the fact that “Spectral Map” and “Séance” also have strong Range and so can be helpful for those Cases that are otherwise out of reach.

Talent: Ghost Magnet [Any Time but Late Game]. Store 1 Clue. This is the equivalent of Kincaid’s Talent, but it places Clues instead of Hits. That means it follows the same strategies: make Fate early; use it carefully when you need that 1 extra Clue; don’t store up too many; and don’t make Fate too close to the end of the game. [See Also Kincaid: Store 1 Hit.]

Stunt: Whispers of the Dead [Early Game]. +2 Clues to 2 Uninvestigated Cases & Swap. Mortimer’s Stunt is one of the hardest to use in the game, probably eclipsed only by Thomas’ “Inner Demon”. The problem is that you need to have two Cases that don’t have any Clues placed on them, and there are three Books with only two Cases (Small Favor, Changes, and Skin Game), plus another seven with three (including Mortimer’s spotlight, Ghost Story). To minimize the chance that you lose out on Mortimer’s Stunt, use it on the first turn. As for the Swap ability: that can be used tactically to make a specific Case more accessible, but only if there’s a choice, which requires there to be three or more Cases in play.

Team Notes. Early on, you need to treat Mortimer with kid gloves: make sure not to touch the last two Cases on the board until he’s talked with the dead about them. Later on, you can work Mortimer much as you do with Kincaid. When you want to apply just one more Clue to a Case, he’s your man. This should help you minimize inefficiencies where you might otherwise have overkilled a Case by a few points.