A primer on creating a Venture City supers character for Fate 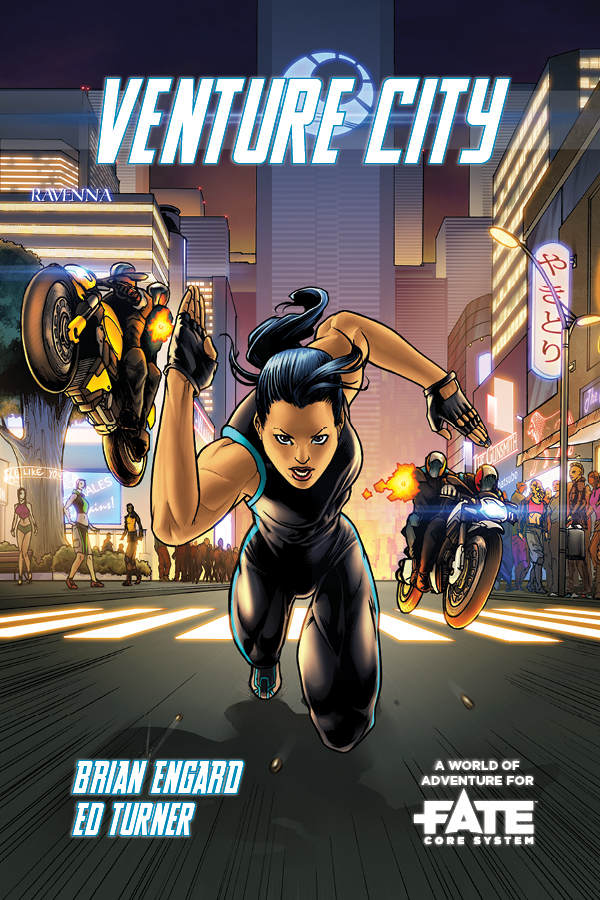 If your gaming group is going to start a new Venture City campaign, then we recommend you follow the guidelines in Fate Core. Sit down together and discuss the setting, decide on the scale of the story, figure out what issues your party will grapple with, and jointly create the major NPCs and locations. Explore the phase trio which gives your characters backstory and connection. We strongly believe this collaborative experience helps set the foundation for an engaging, dynamic campaign.

However, sometimes you just want to play a one-shot or tinker with a new character. That’s where this guide comes in. It assumes you own both Fate Core and Venture City and provides a quick overview of key concepts without going into the weeds of how the system works. And remember: if you really need to make a character quickly, Venture City has a whole set of partially pregenerated characters ready to customize.

Ideally you should start by coming up with your character’s high concept (their role in life and the world), their trouble (their personal struggle) and their name. These will be key to playing the game, but maybe you won’t be inspired until you find out what kind of superhero they are. That’s fine, you can come back to this part at any time.

Most characters in Venture City have one suite of powers. Powers are like a bigger, flashier version of stunts in Fate Core, and they are paid for by using your stunts. Good news: you get three bonus stunts (for a total of six) to help make your character truly super. If that’s not enough juice, you can also reduce your character’s refresh, with each point of refresh equivalent to one stunt. All characters start with a refresh of 3 and can’t go lower than 1.

A power is the basic building block of the Venture City system. It’s the one cool thing that sets your character apart, and the foundation for all the extra effects your hero can do. Let’s take a look at the different attributes of a power.

Basic power: The big, flashy thing your character does. Does she open a dimensional rift and pop across the room? That’s Teleportation. Your basic power costs one stunt.

Enhancements: Optional extra effects that you stack onto your basic power. We decide our hero (lets call her Fermion) can take people with her as she teleports across the street. That’s an enhancement called Collective Teleportation. Each one also costs a stunt. You can improve an enhancement by paying another stunt and bumping the bonus up by +2.

Drawbacks: Every power has a drawback. Fermion’s physical body hypercharges with energy when she teleports and that energy discharges as soon as she appears at her destination, creating an Involuntary Energy Field. Each power has a list of suggested drawbacks but you can also create your own. Drawbacks are free.

Collateral Damage: Each power can be turbocharged for extra potency, with the downside of inflicting collateral damage. You can choose to use this effect at any time to give your abilities a super boost, but it always comes at a cost. In our example, Fermion can teleport to any location in the city that she has seen before (even in photos) but this imprecise maneuver usually ends up with Fermion crashing through something important. She has Jaunt as a Collateral Damage Effect.  Like drawbacks, collateral damage is free.

Special Effects: These are extra-special benefits you can pull off when you succeed with style or score a success and spend a Fate point. Each power gets two special effects from the following list: Forced Movement, Area Attack, Inflict Condition, Extra Movement, Physical Recovery, Mental Recovery, or Extra Action. If you don’t like those you can also create a special effect using those effects as a guideline. It makes sense that Fermion would have the Forced Movement and Extra Movement special effects attached to her power. If you want more than two special effects, you buy two more by spending a stunt.

Power Synergies: These are other basic powers that naturally fit with the foundational power. This is the best way to add to your suite of powers without giving your character a bunch of drawbacks. Each synergy costs a stunt, and you can also purchase any enhancements that apply to the new power. In addition, when it comes time to pick special effects, drawbacks, and collateral damage effects, you can pull from the list associated with your foundational power or any of the power synergies you’ve added. If we want to give Fermion the hurl spheres of crackling plasma, we could spend a stunt and pick Energy Blast from the synergy list for Teleportation. Keep in mind, you aren’t limited to the list when picking power synergies. If you can justify it and pay the stunt, you can combine Teleportation with Illusion or whatever combination inspires you.

Power Themes: A power theme colors how your power presents itself. You might create little licks of fire when and wisps of smoke when you use your power, or perhaps you trail a streak of sparks around wherever you go. Power themes also have their own set of enhancements, drawbacks, collateral damage, special effects, and power synergies you can choose from when finalizing your character. Your first power theme is free, but any enhancements, special effects, or power synergies cost the same as if you were buying them off. If you want a second power theme, that costs a stunt. In the case of our hero, let’s give Fermion the Electricity Projection power theme: she’s infused with electrical energy and whenever she uses her power she creates sparks and bolts of lightning.

Here’s a quick breakdown of the various power elements and their costs:

Once you’ve picked your hero’s suite of powers, only a few things remain:

1) Pick and rate your characters skills. You get one Great (+4) skill, two Good (+3) skills, three Fair (+2) skills, and four Average (+1) skills. All other skills Mediocre (+0) by default, unless they’re considered unavailable if the character didn’t take it.

2) Pick any additional stunts, if you have some left. This is optional, you can just pick one and leave the others open to discovery during play. However: those three bonus stunts we gave you earlier? They have to spent on powers.

3) Determine your character’s refresh. Your player character starts with a refresh of 3 unless you spent refresh to get additional powers and effects.

4) Determine stress. By default each Venture City character has two boxes in each physical and mental stress track unless they have skills or powers that modify this number.

If you skipped over defining your hero’s high concept, trouble, or name, you should revisit that now. Heroes without problems or a guiding principle are boring.

And that’s the overview of the core concepts at work in Venture City! Inspired to make your own hero? Grab a copy of the full hardcover book here or order through your FLGS. You’ll also want a copy of Fate Core if you don’t already have one. Now don your cape, grab on of our form-fillable PDF character sheets, and get out there. Venture City needs you!