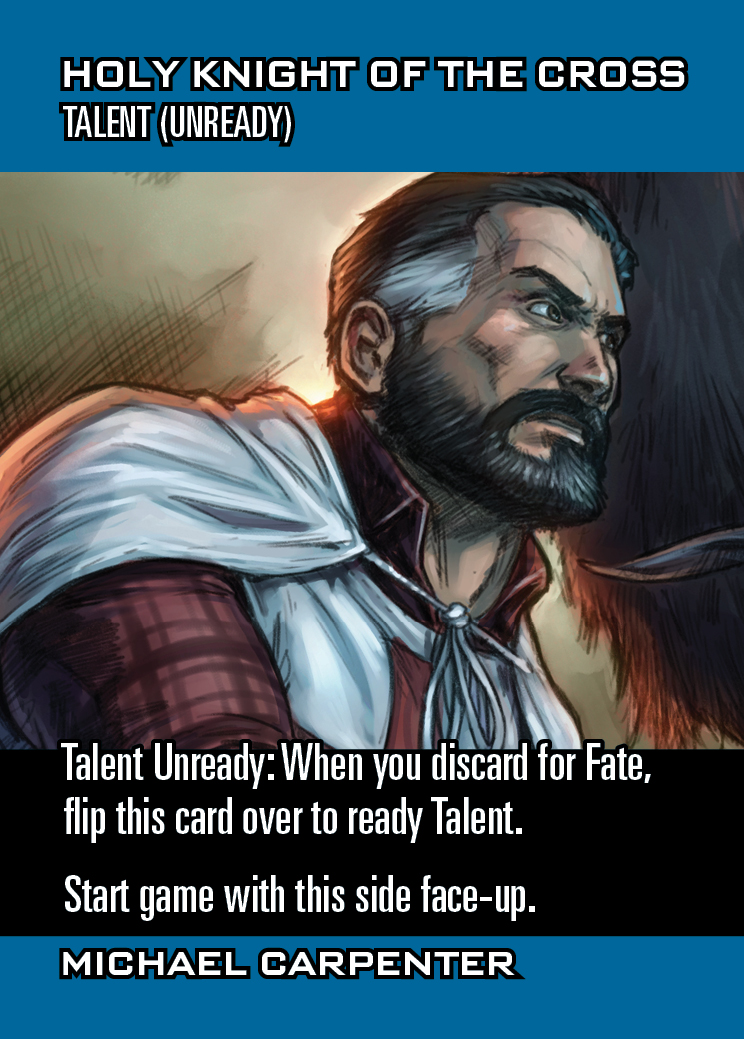 Now you’re ready to play! Though The Dresden Files Cooperative Card Game is primarily about playing cards, you also have to think about managing three other things: Fate, Talents, and Stunts.

Fate is one of the core resources of DFCO and managing it is at the heart of the game.

In general, your team should keep points in the Fate pool at all times. Try to maintain a minimum of five points. This ensures that a player can usually play his best card on his turn. If you must drop below that, try to keep two or three points in the pool, so that the next player can play something. Definitely don’t drop down to zero.

However, don’t think that a player must play his high-value Player card, just because he has the Fate to do so. The goal here is to maintain choice. By keeping the Fate pool half full most of the time, you ensure that each player can make a choice that maximizes the efficiency of the game, so that you never need to discard a card that could have been better used.

Corollary #1: Empty the pool if it’s part of a plan. There’s nothing wrong with dropping the Fate pool all the way down to zero if it’s part of a plan. If you know when the pool is going to empty out, and if the next player says that he’s OK with discarding a card to keep things moving, then you’re fine. But you have to plan it out, not empty the pool and then hope things will work out.

Generate Fate When You Want to Use a Talent

Make sure that both of these possibilities are part of your tactical decisions. In other words, act like you have four active choices on your turn, not three: you can generate Fate (and use your Talent), you can use a Talent (and generate some Fate), you can use a Stunt, or you can play a Player card.

Make sure that everyone at the table makes Fate part of the time. In large part, this is about good sportsmanship and having fun. Even if in some circumstances it might be slightly less efficient to have someone else generate Fate, go with the lesser level of efficiency. However, in general this is also the best strategy: everyone has unique abilities, and if your team cuts some of those out, you’re making the game harder.

Never Take the Chance of Using Too Much Fate

Never, ever, ever, under any circumstances play a card with a variable Fate cost that could require more Fate than is in the pool. If you roll high, this will bring the game to a premature end and it will do it in a very inefficient way, because you’ll lose the Fate and the card effect. There is pretty much no circumstance were it wouldn’t be better to discard the card for Fate, and then hope to win in the Showdown.

Talents are activated whenever you make Fate, so the two game elements are tightly intertwined.

Always Use Your Talent

Any Fate-making turn has two elements: making the Fate and using your Talent. If you can’t use your Talent, then you’ve lost part of the efficiency of your turn, and this is quite easy to do. If there are no Advantages or Obstacles left on the board, then Harry can’t use “Wizard, P.I.”; if there are no Cases with Clues, then Ramirez can’t use “It Hurts To Be This Good!”; and if there are no Foes with Hits, then Waldo can’t use “Forensic Pathologist.” Similarly, the Talents that add tokens to specific Cases and Foes might be blocked by certain Obstacles.

If you have other options, don’t generate Fate on turns when your Talent would be useless. Though Talents aren’t as powerful as Player card plays, if you add together two or three missed Talent uses, then you’ve again lost the equivalent of a turn.

Corollary #1: Don’t use Talents wastefully. It’s very easy to make inefficient use of the Talents that add Hits to Foes or Clues to Cases because they don’t offer much control over which cards are affected. If you use these Talents to affect Cases (or Foes) that will never be removed, then you’ve wasted them just as much as if you weren’t able to use the Talent at all. Other Talents could similarly be wasted. The best solution to this problem is to make the usage of these Talents efficient by incorporating them into your overall strategic plan. Otherwise, let someone else make the Fate.

Different Talents work better at different times during the game. For example, Harry is more likely to use his Talent early in the game, while the team is clearing initial Obstacles. Michael and Molly need to make Fate intermittently, as they toggle their Talents and use them. So be thoughtful about how the timing of Talent usage interacts with making Fate; arrange it so characters will be making Fate when their Talents suggest that they should.

Though Stunts are much more powerful than Talents, many of the same rules apply: you want to make sure everyone uses them, and uses them well!

Remember that you can only use Stunts when they actually have an effect. You don’t want to get into situations where your Stunts can’t have an effect, because this causes you not only to lose out on a powerful ability, but also to lose a turn of play. This likely puts your character out of sync with the rest of the team and will cost a Fate when your have to pass later in the game.

A number of characters have Stunts that can become unusable if you’re not careful. Your team needs to work together to make sure that doesn’t happen:

Use Your Stunt Efficiently

A lot of Stunts are binary: they either work or they don’t. However there are some Stunts that get better based on the board setup, especially Billy & Georgia (who Attack every Foe with Hits), Butters (who Investigates every Case with Clues), and Murphy (who earns Fate based on cards with tokens). Try not to use these Stunts when they produce little effect, but instead when they produce great effects.

Similarly, let Ramirez use “Got Your Back” for someone when they have a great card in their discard and let Mouse do a “Temple Dog Warning Bark” for someone with a Stunt that would be really great to reuse.

Corollary #1: Don’t try to be too efficient. Because Stunts are one use and you know you won’t get them back (except with Mouse’s help), it’s psychologically easy to delay using your Stunt in the effort to over-maximize…and as a result miss your window for optimal play. So don’t overdo it. Try to maximize the effect of your Stunt, but if you think things look pretty good, go ahead and pull the trigger.

Corollary #2: Use your Stunt when your other options are bad. Sometimes you want to use your Stunt because your only other option is to waste a Fate by passing, make inefficient use of a good card, or empty the Fate pool at a bad time. Part of the value of Stunts is that they take up your turn and cost no Fate to play.

Stay tuned to this space for the next section on Playing Player Cards, which will go live on Wednesday, July 19!