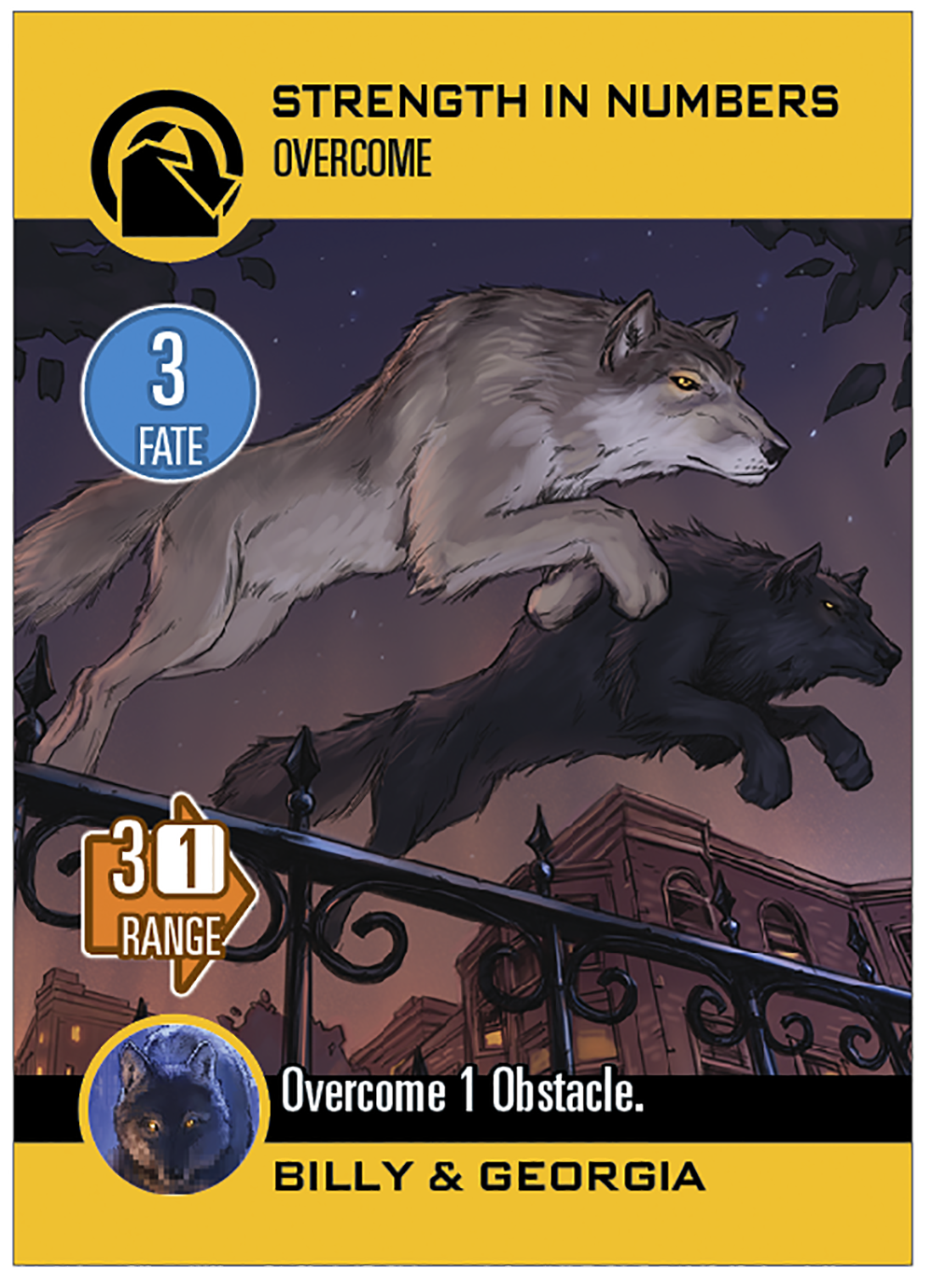 Advantages and Obstacles are best discussed together, because for both you aren’t required to remove them in order to win, but it’s usually still worth doing so.

When you “Plan Your Initial Targets,” you’ll usually be going after Advantages and Obstacles. That’s in part because they’re very easy to resolve: you just play a single card, and the Advantage is taken or the Obstacle is overcome. This can help you to quickly reduce the Range to Cases and Foes. However, it’s also useful to remove Obstacles early on because they’ll be causing you problems and costing you efficiency, and it’s helpful to remove Advantages early because they can give you more options and allow you to improve your strategy.

The catch is getting Advantages and Obstacles into Range so that you can deal with them. (But remember the most easily overlooked setup rule in DFCO: if an Advantage or Obstacle is at Range 6, it gets swapped one closer.)

Corollary #1: Use Harry to move up Advantages and Obstacles. This is why Harry must be in every game of DFCO (c.f., the second most easily overlooked rule in DFCO). He helps your team to clear Advantages and Obstacles by moving them ‘to and ‘fro with his Talent. Make use of that early in the game, so that you can clear these problem cards.

Corollary #2: Consider alternatives to Harry’s Talent. You can also move Book cards closer by removing cards in front of them. Some Stunts or Book card effects can incidentally move cards behind their targets one closer when they move the target card to a higher Range.

You almost always want to overcome every Obstacle, and you almost always want to do it as quickly as possible. For example, consider the two Obstacle cards in Storm Front: “Three-Eye Drug War” changes one blank die to a “-” on each roll, and “Morgan is Watching” increases the cost of Attacks by +1 Fate. Each is likely to cost you a couple of turns of efficiency over the course of the game, so it’s probably worth removing them. Keep in mind that Obstacles still on the board continue to be in effect during the Showdown!

Corollary #1: For long-Range Obstacles, think carefully about whether to remove them. If an Obstacle is at long Range, its effective removal price goes up, as you must spend turns and resources bringing it closer, and then must either pay higher Range costs to Overcome, or else waste some other advantage (like Michael’s Talent). In these cases maybe the cost-benefit ratio isn’t high enough. The “Lunar Cycle” Obstacle card in Fool Moon offers an example of when you might not remove an Obstacle: it prevents your team from damaging the two “Loup Garou” Foes and you can technically win without killing them by solving all the Cases and killing all the other Foes. So if the “Lunar Cycle” and the two “Loup Garou” were all toward the back of the board setup, that might be a situation where you decide to try something else.

Similarly, you usually want to take all the Advantages, because they’ll often earn you more turns than you spend on them. Consider “Beer at Mac’s” in Storm Front, which gives you three card draws (which is equivalent to three turns) for spending one turn of activity and perhaps as little as 1 Fate.

Corollary #1: For less useful Advantages, think about it. More frequently than with Obstacles, you might decide to ignore Advantages if they’re inconvenient. “Speed Potion” is an example. At just +1 card draw, it may actually be a loss to take the card, especially since the other results (taking another turn and moving “Kalshazzak” to maximum range) could be negatives. So you have to decide if it’s worth removing the Advantage just to clear the spot on the board. If the results seem beneficial to your current situation, do it, but if not, don’t!

Advantages frequently grant Players card draws. Card draws occasionally result from a few other sources, such as Ramirez’s Stunt and Mouse’s Talent, but Advantages are the main source of cards.

When you gain Player card draws, do your best to spread them out, so that players get them equally. This ensures that everyone can actually use their cards, without forcing other players to spend Fate passing their turn.

Corollary #2: Even out Player card draws after the fact. If you didn’t spread out your card draws initially, try and do so later…but be aware that there aren’t a lot of options for doing so. Mouse’s Talent is the best, because he can choose different people to discard and draw a card. This helps a lot if player hand sizes have gotten uneven for any reason.

Corollary #3: Ignore all these rules if someone has a bad hand. If someone has a bad hand, then that probably means they’ve got great Player cards in their draw pile. Especially if you’re playing with fewer players (meaning there are fewer cards left in the draw piles), give those players preferential draws because of the increased odds of drawing a good card.

In an average game of DFCO, you’ll have more Overcome and Take Advantage cards than you need in order to remove Obstacles and Advantages (and, conversely you’ll have fewer Attacks and Investigates than you need to remove Foes and Cases). Do your best to keep track of how many Overcomes and Take Advantages your team has (within the rules for “game discussion,” which forbids the naming of specific numbers), and use the excess as Fate fodder. It’s helpful to do this early on, before you start spending cards you might actually need. When you’ve removed all the Obstacles and Advantages from the board that you plan to, then definitely burn through the rest of your Overcome and Take Advantage cards to generate Fate, in preference to anything else.

Stay tuned to this space for the next section on Attacking Foes & Cases, which will go live on Wednesday, July 26!