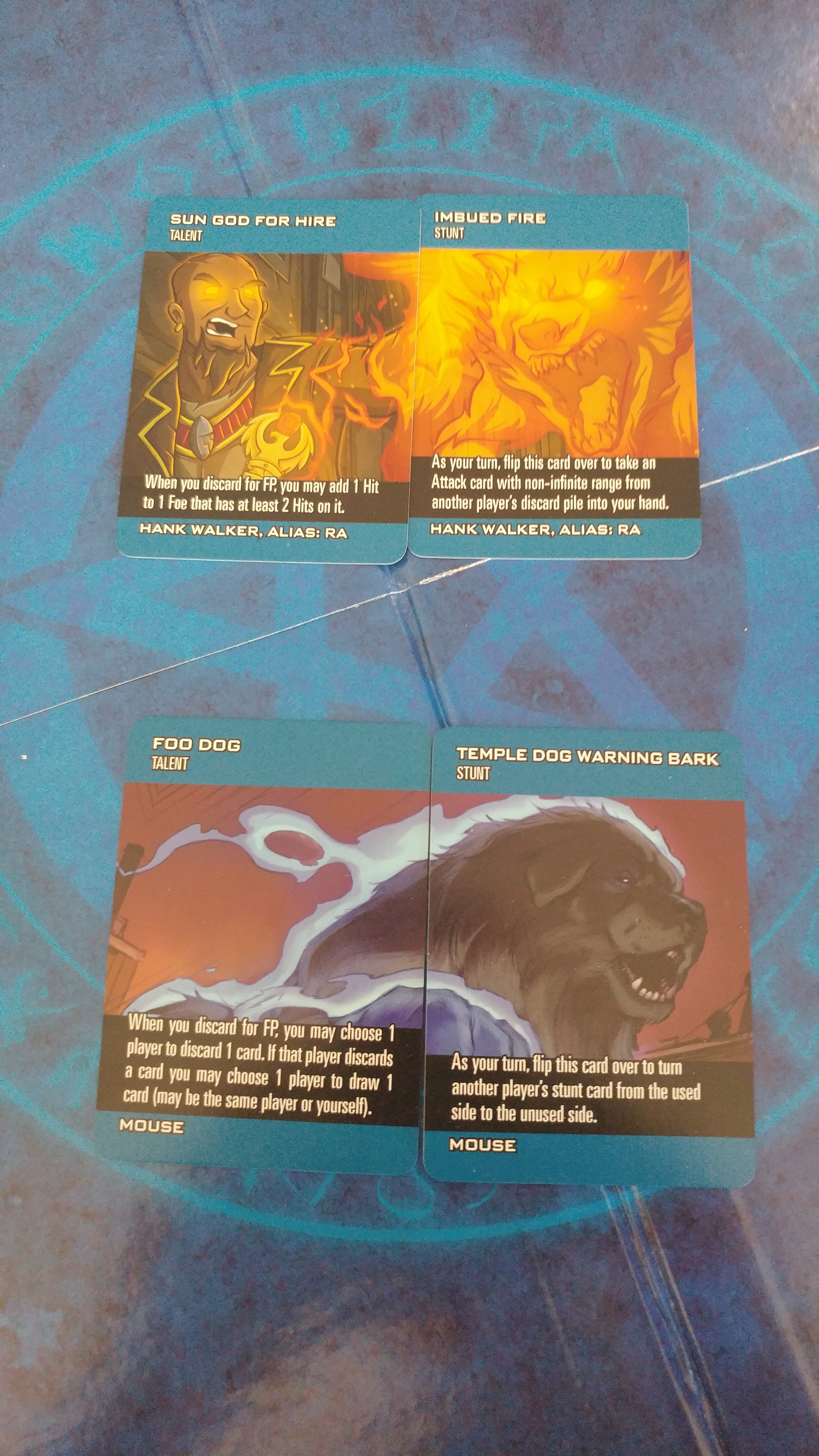 Do you play the non-Dresden Files deck?

Cards of Note. Ra has some unique Overcome and Take Advantage cards. “The Staff of Ra” lets him take an Advantage and keep this Player card if he discards something else, which is handy if your group has ended up short on the card type, while “Scorched Earth” is expensive at 4 Fate, but overcomes the nearest Obstacle, which is useful if something is hanging out at the back of the row.

Best Suit [Attack: 14]. “Blazing Tornado” is of note because it’s one of those rare cards that can do 6 Hits for 5 Fate, in this case if there’s a second Foe adjacent. Otherwise, Ra has some nice Range.

Talent: Sun God for Hire. +1 Hit to a wounded Foe, with two Hits or more. The requirement of two Hits is a slight limit on Ra’s Talent. Try and make that happen quickly, so that he always has a target if he needs to make Fate.

Stunt: Imbued Fire. Take a discarded non-∞ Attack card from another player. Obviously, Ra’s Stunt is dependent on other players having Attack cards. Do your best to retrieve one worth 4 or 5 Fate, but remember that non-infinite limitation, so that you don’t have a rude surprise when you go to grab the card and your resident Rules Lawyer says, “No!”

Team Notes. Make sure to wound a character early on, so that Ra can use his Talent at will.

Mouse is the best support character in the game.

Cards of Note. ”Eat Mister’s Food” is a Take Advantage with a shocking Range of 4+2dF, for a reasonable cost of 3 Fate. If you need a hail-Harry to clear an Advantage at Range 5 or 6, this is your card (just be sure you also have an Advantage to take as near as 2, in case you roll badly). Mister isn’t fond of the card, though.

Best Suits [Attack: 11, Investigate: 11]. Unsurprisingly, Mouse’s deck is balanced like a Knight of the Cross. The Attack and Investigate are both strong suits. Especially note his “The Nose Knows” Investigate and “Claw, Claw, Bite” Attack, each of which can swap cards between the rows besides delivering their normal count of token—something that can be used to help out other characters with cards that affect an entire row.

Talent: Foo Dog [Any Time]. Choose a player to discard a card, choose a player to draw a card. Mouse is the ultimate card equalizer, who can make sure that all of your players have the same number of cards, minimizing passes at the end. If you have any large inequity of cards among the players, equalizing it should be Mouse’s first priority: have a player with too many cards discard one of them and have a player with too few cards draw one. If the cards are roughly equal, Mouse can instead help out players who didn’t draw their best cards, as is discussed in Susan’s Stunt strategy.

Stunt: Temple Dog Warning Bark [Mid- to Late Game]. Choose a player to flip over a used Stunt. This is like Molly’s Talent (which lets her use a Stunt), but it gives that additional use to the original player. As with Molly, you can use this very tactically to ensure that you get an extra use of the most appropriate Stunt for you game. If you think it’s useful to reuse a Stunt that works best in early game (like Michael’s), be sure that Stunt gets used very quickly and Mouse gives his warning shortly thereafter. Be aware that a player who gets their Stunt back will have an extra turn, just as if they’d drawn an extra card. So you can also use Mouse’s Stunt to balance player-turn inequities (or if you create an inequity with the Stunt, you may need to balance it with his Talent).

Team Notes. Mouse is the ultimate team player. Coordinate with him to decide who is going to reuse Stunts, which should be part of your big-picture strategy, and who could benefit from card draws and/or card equalization.

Stay tuned to this space for the next section on Picking Your Characters, which will go live on Wednesday, August 23!