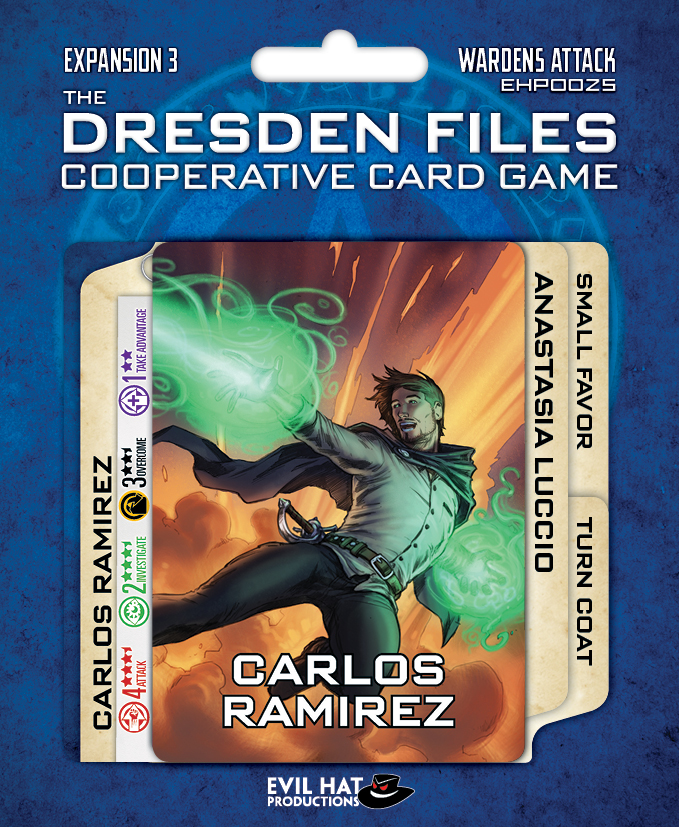 Luccio is a combat beast who can tactically consolidate Hits and Clues.

Cards of Note. Luccio has one of the more expensive Take Advantages in the game: “Council Access,” which costs due to its Range of 4. Besides that, her “Strategy” and “Pyromantic Precision” are of note, because they respectively allow the division of five Clues or Hits among Cases or Foes in Range.

Best Suit [Attack: 12]. Besides “Pyromantic Precision,” Luccio’s Attacks also include “Silver Scimitar” and a “Flame Ribbon” that’s overpriced due to its greater Range.

Talent: Captain of the Wardens [Any Time]. +1 Clue to hardest Case or +1 Hit to toughest Foe. Do damage to a high-value Foe or Case. Ideally, you want to go after a highest-value Case of Foe that’s near the head of a row: it’ll help clear the row and it’ll make sure the tokens you place aren’t wasted.

Stunt: Focus Our Efforts! [Mid- to Late Game]. Move Clues or Hits among Cases or Foes. This is probably one of the more underrated Stunts because it doesn’t improve the count of tokens as you move them nor does it guarantee a kill. Instead, you have to use the Stunt carefully and subtly. Its power is that it removes inefficiency. If you were stacking tokens on a few different Foes (or Cases) that you aren’t likely to solve with an average Showdown, then you can instead consolidate them. Instead of two cards you weren’t going to finish, you hopefully end up with one you will. This can increase the efficiency of your Showdown.

Team Notes. Work with Luccio to make sure that the toughest Foe or hardest Case is something that will accept tokens and can eventually be solved. Also talk with Luccio about how her Stunt empowers everyone else’s abilities—like Billy & Georgia, Murphy, and Butters, whose Stunts power up when there are more tokens out, and Ramirez and (again) Butters, whose Talents move tokens around.

Ramirez is another combat beast, but with surprising ability to remove Obstacles too.

Cards of Note. “Entropic Blast” and “Steadfast Ally” are high cost Attack and Investigate cards with a special power: they also hit either an adjacent Foe or Case. They offer great versatility, possibly allowing you to finish other Foes or Cases or just to spread out the tokens. The “Regional Commander” Overcome card is also of note. Though it’s a high-cost card at 4 Fate, it basically pays for itself because it lets you draw a card. Play it if you’re early in the turn order or if you know that you have high-cost cards in your draw pile.

Best Suit [Attack: 14, Overcome: 7]. Ramirez’s Attack suit totals four cards. Besides “Entropic Blast” there are “Emerald Light” and “Disintegrator Screen” which do nice short-range damage. Ramirez also gets a reduced version of Harry’s “Pyrofuego!”: “Grenades” adds 1 Hit to all Foes in a row. Meanwhile, don’t overlook Ramirez’s Overcome cards, which total three; it’s one of the stronger Overcome sets in the game. If you’re having problems with Obstacles, and you have a card draw, Ramirez is your go-to warden.

Talent: It Hurts to Be This Good! [Any Time]. Change 1 Clue to 2 Hits. The strategy is the same as Butters’s Talent strategy: increase token count; bail on Cases you won’t solve; and increase Hits on vulnerable Foes. [See Also Butters: change 1 Hit to 2 Clues.]

Stunt: Got Your Back [Mid- to Late Game]. Return a discarded card. The most obvious use of this Stunt is to give someone a “5” Fate card back. Try not to use it unless you can do that. However, you can also recover a type of card that your group needs more of. Perhaps most importantly, you can use it to even out card counts among the players, to minimize passing at the end of the game.

Team Notes. Harry and Ramirez work so well together! Imagine a Pyrofuego from Harry followed by a Grenades from Ramirez, and then Ramirez giving Harry his Pyrofuego back. You’ve done 5 Hits to every Foe in a row! Meanwhile, to allow use of Ramirez’s Talent, be sure that you have Clues sitting out.

Stay tuned to this space for the next section on Playing Promo Characters, which will go live on Monday, August 21!