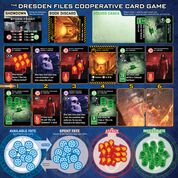 The core to successfully winning The Dresden Files Cooperative Card Game is to understand the three resources that form the heart of the game.

Turns Are the First Most Valuable Resource

In any game of DFCO, your team of players has a limited number of turns: usually a bit more than 24 total. That’s one turn for the players to spend each of their four to seven cards, then one turn to use their Stunts. You might get a few more turns from Advantage-based card draws or from special powers, but that’s it.

In those limited turns your team must remove enough Book cards from the game board to achieve a winning score. If you were trying to defeat all twelve Book cards, then you’d need to remove a Book card every other turn. Given that you’ll be making Fate with half of the Player cards, you would actually need to beat one Book card every action-turn.

If you think that sounds impossible, you’re right, but fortunately your team doesn’t actually need to beat every Book card to win. You just need to take down enough Foes and to solve enough Cases. However you can’t lollygag either. Harry would never lollygag. You’ll barely have enough turns to do what’s necessary—if you’re lucky. So, you have to appreciate the value of every single turn and make the most of each one.

Corollary #2: Use your turns efficiently. Less obviously, you should never take turns that are inefficient—unless that’s the only option. Don’t play cards that are less efficient because they are being hampered by Obstacles. Don’t waste the benefits of advantageous Book card interactions. Don’t overfill the Fate pool when you discard. Every couple of wasted Fate, Clues, or Hits is the equivalent of a lost turn.

Player Cards Are the Second Most Valuable Resource

You have a limited hand of Player cards. They’re the main timer for the game, but they’re also your resource pool—both determining what actions you can take in the game and how you can power those actions. Without your cards, you are nothing.

The card draw certainly introduces randomness into the game. If you get all of your low-power cards, you’re more likely to lose, and if you get all of your high-power cards, you’re more likely to win. However, even if you’re dealt a truly bad hand, you can sometimes make a go of it. You just need to know your cards—to understand which cards are good and more importantly, how to use them optimally.

Corollary #1: Be aware of your Player deck. It’s worth skimming through your Player deck before you play, so that you know what’s in it. The character dividers help with this overview and are worth keeping out. If you know your deck (or at least can reference it from your divider), you’ll know whether you got a good hand or a bad hand. More importantly, you’ll know what you didn’t draw and what you’re likely to get if a draw effect occurs.

Corollary #2: Never take the chance of wasting your Player cards. Some Player cards have variable Range. You do not want to use them if there’s any chance (no matter how small) that you could roll such a low Range that the card would be entirely wasted. If a bad roll might result in a card being used in a less efficient way, that’s probably OK; that’s the type of uncertainty you have to face in a co-op. However if a card might be unplayable, that’s no good. So don’t play Harry’s “Private Investigator” card (Range: 3+1dF) when all the Cases are at Range 3 or more. There’s one exception to this rule: if you’re in a desperate situation, and you would probably lose otherwise, give it a try, but recognize that this is a desperation play!

Fate is the Third Most Valuable Resource

The third key resource in DFCO is Fate, because it’s what allows you to play cards and to take turns. Most of the strategic principles governing Fate management have been discussed in the sections on turns and cards, but Fate is so central to the DFCO game that it will also be covered in a later segment “Managing Your Fate.”

Corollary #1: Never waste your Fate. Don’t spend Fate on turns that you don’t need to take.

Corollary #2: Use your Fate efficiently. Don’t spend Fate on Player cards that are more powerful than necessary.

Stay tuned to this space for the next section on Planning Your Actions, which will go live on Wednesday, July 12!