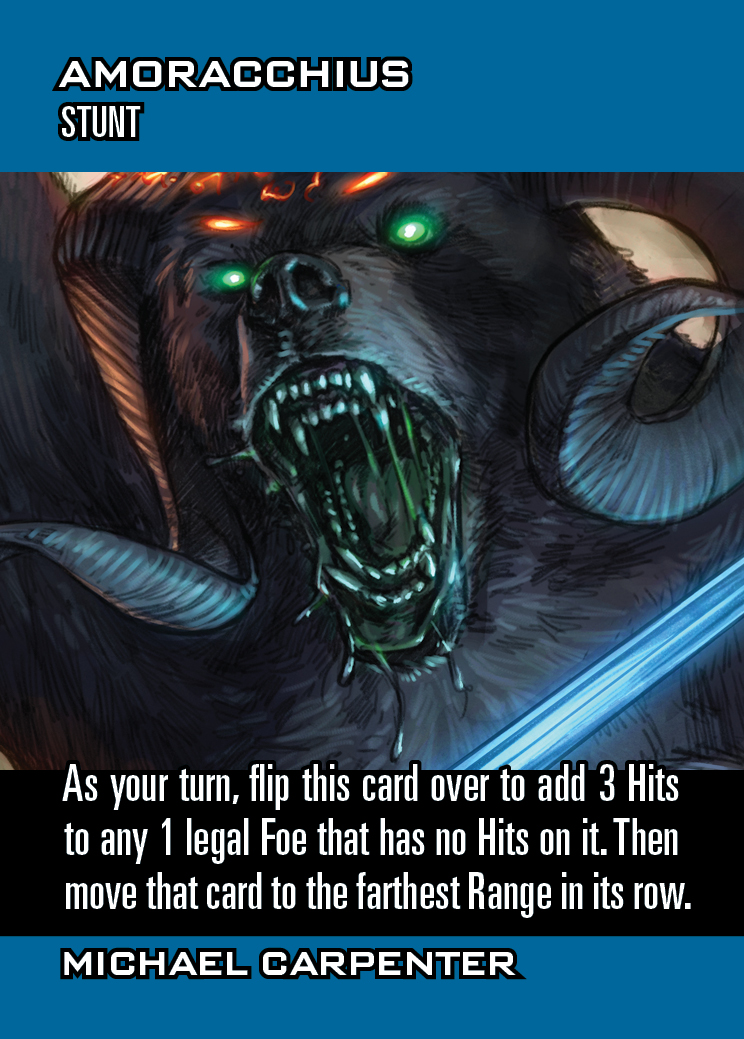 Each game of DFCO starts out tactically, as you work to clear Obstacles and Advantages early in the game. However, at some point you need to do more strategic thinking, and plan how your team is going to ultimately win the game.

Play to Win by One Point

Your team’s final score in DFCO will be the number of Cases you’ve solved minus the number of Foes still on the board. Around the halfway point of any game, your team should decide which combination of Cases solved and Foes defeated will sum to exactly +1 point. Talk it out. Because each player only has perfect knowledge of their own hand, it is important to hear from everyone. Then specifically identify which Book cards you’re going to try to annihilate, and go for it!

Corollary #1: Foes or Cases matter not. You have to solve at least one Case to win a game, but after that it doesn’t matter if the team eliminates Foes or Cases, as long as they sum +1 point.

Corollary #2: Remember the Showdown. You don’t have to finish off those Book cards with your own cardplay. In fact, it’s rare that normal gameplay will allow your team to remove all the Book cards that you need to earn your +1 point. That’s OK, because you still have the Showdown; just make sure that your strategic plans include giving your team good odds on those final rolls.

As you near the end of the game, your team will be running out of Player cards. Do your best to figure out what types of cards your team has left and how to play to those strengths. This usually comes down to a question of Attack cards or Investigate cards. Your team must determine if it has enough Player cards to make a difference in either suit; often, you’ll end up concentrating on just one of them. This will then help you to identify whether you’ll be killing Foes or solving Cases.

Corollary #1: Make Fate with the losers. If you determine that one of your two suits won’t do any good in the end game, use it as your prime fodder to generate Fate for your final rounds of play.

If you have any Stunts that you’ve been holding in reserve, then your team should definitely plan for how to use them now. If a Stunt can help you in your goal of earning +1 point to win the game, that’s optimal. However, even using a Stunt for very little gain is worthwhile, because it will (probably) keep the turn order balanced and keep you from spending Fate to pass. So figure out how to make that happen, at a minimum, if it doesn’t damage your efficiency in some other way.

At this point: poor efficiency is better than no efficiency.

Don’t Try to Do It All

This is largely a corollary to “Play for One Point” but it nonetheless deserves its own rule of thumb. Do not try to clear the board. You won’t be able to, and you’ll probably mess up your chances to actually win if you try to do too much. You need to pick your battles. The object is simply to defeat enough Cases and Foes. Work toward that.

Corollary #1: Don’t mess with Book cards you won’t remove. Once you’ve figured out how to “Play for One Point,” you should totally ignore the Foes and Cases that you’re not going to finish. Definitely don’t play Player cards whose main purpose is to put tokens on those Book cards, and try not to use overflow effects like Harry’s “Pyrofuego!” against them. If you have any way to swap or move Book cards so that you can overflow onto a relevant Book card instead of an irrelevant one, do that! Remember, “Don’t Throw Away Your Shot.” If you need to remove one card during the Showdown to win, its better to have a shot at one card with good odds than to have a long shot at three different cards.

Stay tuned to this space for the next section on Ending the Game, which will go live on Wednesday, August 2!