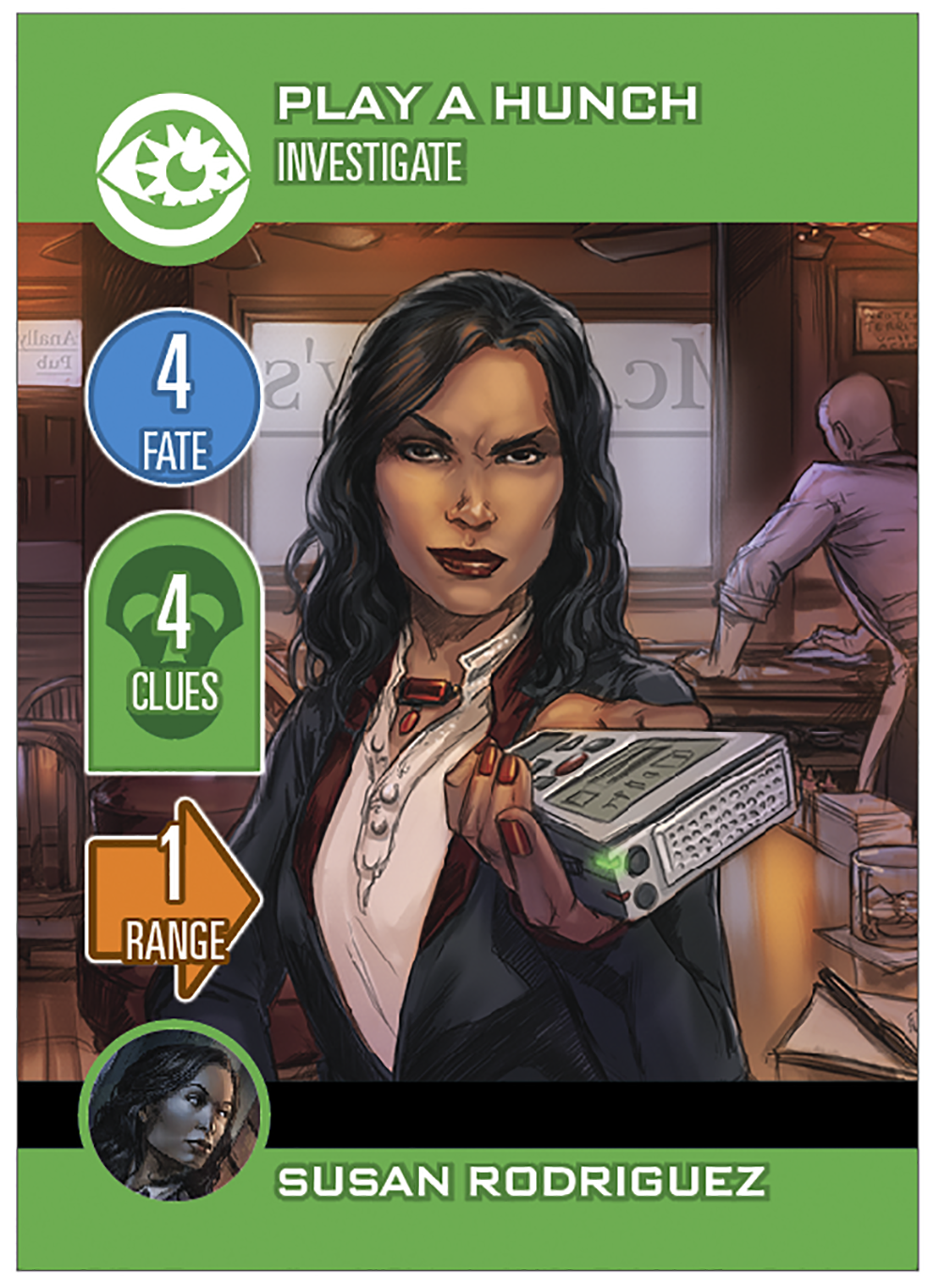 Cards of Note. Almost every one of the Billy & Georgia cards is notable because with just two exceptions they all have strong Range, without much additional Fate cost. Their Attacks span from Range 2 to Range 3, with a cost that’s around a 1:1 Fate:Hits ratio, and their Investigates are similar. If you need someone to place tokens on cards at Range, and you don’t want to pay for it, these are your wolves. (The Alpha’s long-range Overcome and Take Advantage cards are more expensive.)

Best Suit [Attack: 13]. The wolves have a total of four(!) Attack cards. The thing to watch is that one card (“Death Grip”) restores Fate if used to defeat while another (“Savage”) can’t be used to defeat. So, play them early! You don’t want to get stuck with an unplayable card, nor do you want to waste the efficiency of that Fate restoration.

Talent: Leaders of the Pack [Any Time]. +1 Hit to furthest Foe. Make sure that you can eventually make these distant Hits useful—by getting the Foe into Range, using long-range Attacks, or transferring the damage. [See also Murphy: +1 Clue to furthest; Thomas: +1 Hit to nearest; Susan: +1 Clue to nearest]

Stunt: Alpha Pack Attack [Mid-Game]. Add Hits to hit Foes. This is one of those Stunts that you should be very careful with. Don’t keep waiting for the “ideal” usage and don’t put Hits on Foes that will be useless just to make this Stunt seem better. [See also Butters: Add Clues to investigated Cases; Murphy: Make Fate for tokened cards.]

Team Notes. Don’t move invulnerable foes to the longest Range, or Billy & Georgia won’t be able to use their Talent. Meanwhile, spread out team damage early on (as long as it will be useful), but don’t finish things off, so that they can maximize their Stunt.

Harry manages the Advantages and Obstacles.

Cards of Note. Harry’s most notable cards are “Pyrofuego!” and “Consult with Bob,” which add Hits or Clues to all the Foes or Cases in a row, respectively. They should be used with care, however: if there aren’t enough Foes or Cases in a single row, they will be inefficient. They are clearly worthwhile if they add Hits or Clues to three cards, but may not be worthwhile if they hit just two.

Best Suit [Investigate: 12]. Besides “Consult with Bob” there’s also “Soulgaze” which adds an impressive 5+2dF Clues and “Private Investigator”—which will probably be used as a Fate generator unless you really need a 3+1dF Range!

Talent: Wizard, P.I. [Early Game]. Move Advantages or Obstacles. Harry’s Talent is the heart of the game. It’s a Talent that should be used in the first few rounds to move Obstacles or Advantages to the front of the rows (or to the back). Burn Harry’s less useful cards in order to help remove these early Book cards. Meanwhile, save the cards that seem most useful for later in the game, when the Fate generation will be turned over to others.

Stunt: Blasting Rod [Mid- to Late Game].+4 Hits to Foe if that will kill them. Optimally, get a Foe to exactly 4 Hits left, to maximize this Stunt’s efficiency.

Team Notes. Depend on Harry for Fate generation early in the game, but expect to support him with Fate later in the game. Also, help to set up his Stunt by arranging it so that Foes have exactly 4 Hits left. Butters and Rodriguez can use their Talents to manage this precisely. If a player gets an opportunity to re-draw a card from discard, it is often best to let Harry re-draw “Pyrofuego!” or “Consult with Bob.”

Murphy is one of the top investigators.

Cards of Note. Note Murphy’s several cards (“Deadeye Shot,” “Detective Work,” and “Interrogation”) that all give bonuses if they finish off their Foe or Case; work to make sure they do—unless several players in the gamers have this same criteria on their cards, then consider using them for Fate generation.

Best Suit [Investigate: 15]. Murphy’s ”Street Sense” has a great 1:1 Fate:Clue ratio, thanks to its Range of 1. Meanwhile, “Detective Work” and “Interrogation,” which pay for their Range of 3 with extra Fate, are definitiely worthwhile as long as they close their Cases.

Team Notes. A mirror to the suggestions for Billy & Georgia: don’t move a Case to the longest Range that can’t have tokens placed on it; and early on spread out your tokens without removing Cases or Foes—until Murphy uses her Stunt.

Michael is a problem solver who deals with Advantages and Obstacles.

Cards of Note. Michael can dump a pile of tokens with “Dragonslayer” and “Divine Revelation,” each of which averages a 1:1 Fate:Token ratio and drops down five tokens.

Best Suit [Balanced]. All of Michael’s suits total either 7 or 8 Fate. This makes the Overcome and Take Advantage suits notable; at three cards each, they’re most of his deck. “Kevlar Helps” and “Prayer” are pretty standard cards that remove an Advantage or Obstacle at Range 1 for 1 Fate. It’s “Family Man” and “Fist of God” that are amazing. They have Range 2 and cost 4 Fate, but they also drop two tokens on Foes and Cases on either side. If they can be used for maximum efficiency then the Overcome or Take Advantage power is pretty much free.

Talent: Holy Knight of the Cross [Intermittently, Early to Mid-Game]. Later, extend Range by 2. Michael’s Talent is pretty great because extended Range usually costs extra Fate. Instead Michael has six different cards with Range 1 that all average a 1:1 Fate:Token ratio, but which he can actually use at Range 3 with his Talent. So, power up Michael on his first turn, use as necessary, then power up again. Just be sure not to power him up toward the end of the game when the power will likely be wasted. [See also Molly: Ready for die change.]

Stunt: Amoracchius [Early Game]. +3 Hits to a Foe with no Hits and push them to back of row. Michael’s Stunt is one of the hardest to use well in the game. First, it’s easy to mess up and realize that you can’t use it because all the remaining Foes have already taken Hits. Not only do you lose a great power, but you also lose a turn of play. Wasting a Stunt is the quickest way toward loss in DFCO. But beyond that, you push the Foe to the back of the row. In order to use it effectively, you need to go after a weak Foe (who will die in the Showdown, even with no more Hits) or someone that other Stunts or Talents can hit. There’s one other option: Attack someone in a row that’s become short, leaving them accessible. This will let Michael double up on his Stunt and Talent. If he only knocks someone back to a Range of 3, he can then Hit them with his Talent and either of his Attacks. [See also Sanya: +3 Hits to Uninvestigated Case & pull.]

Team Notes. Have Harry move around cards to maximize Michael’s use of “Family Man” and “Fist of God.” This is a fair trade-off because you may need to worry less about moving those Advantages and Obstacles to closer Ranges because of Michael’s Talent. Make sure that you’re aware of Michael’s need to have a Foe empty of Hits, so that you don’t accidentally spoil his use of his Stunt.

Susan may be an even better investigator than Murphy.

Cards of Note. The “Expose” Investigate Hits a Foe if it solves a Case and the “The Pen is Mightier…” Attack Investigates a Case if it does not defeat a Foe (which is much easier to do). Try to always use these for their maximum efficiency.

Best Suit [Investigate: 14]. Susan’s 14 Fate of Investigation is concentrated into just three cards. That means her worst Investigate, “Play a Hunch,” delivers 4 Clues for 4 Fate. And it just gets better from there.

Talent: Arcane Reporter [Any Time]. +1 Clue to nearest Case. Susan’s Talent is a lot easier to use than Billy & Georgia’s and Murphy’s, because it adds tokens to a nearby card instead of a faraway one. You still have to make the tokens count, of course, but it’s a lot easier to do so. [See also Billy & Georgia: +1 Hit to furthest; Murphy: +1 Clue to furthest; Thomas: +1 Hit to nearest.]

Stunt: Timely Assist [Mid- to Late Game]. Choose a player to draw a Player card and take the next turn. Susan’s Stunt can help with turn order, but it may not be immediately obvious how that works because of the combo of the card draw and the turn. Effectively she’s both giving a player an extra card/turn and moving them to the start of the turn order. So, if a few players near the end of the original turn order have extra cards, Susan can give the player just before them the card draw and play, and that will balance things out. If the cards are roughly equal, Susan can instead help out a player who didn’t draw their best cards. Remember that the average Fate value of a card is 3. So, have each player count up their cards in hand and played. If someone averages way less than 3, then they’re a great candidate for some assistance. Absent either of these situations, it’s often best for Susan to give the draw to herself.

Team Notes. If a Case that can’t have tokens placed on it ends up at the front of a row, work to get a Case to the front of the other row too, so that Susan can use her Talent. Meanwhile, if you’re one of those people who got a really bad card draw, particularly if you know one of your great cards is in your draw pile, tell Susan.

Stay tuned to this space for the next section on Playing Expansion #1, which will go live on Wednesday, August 9!