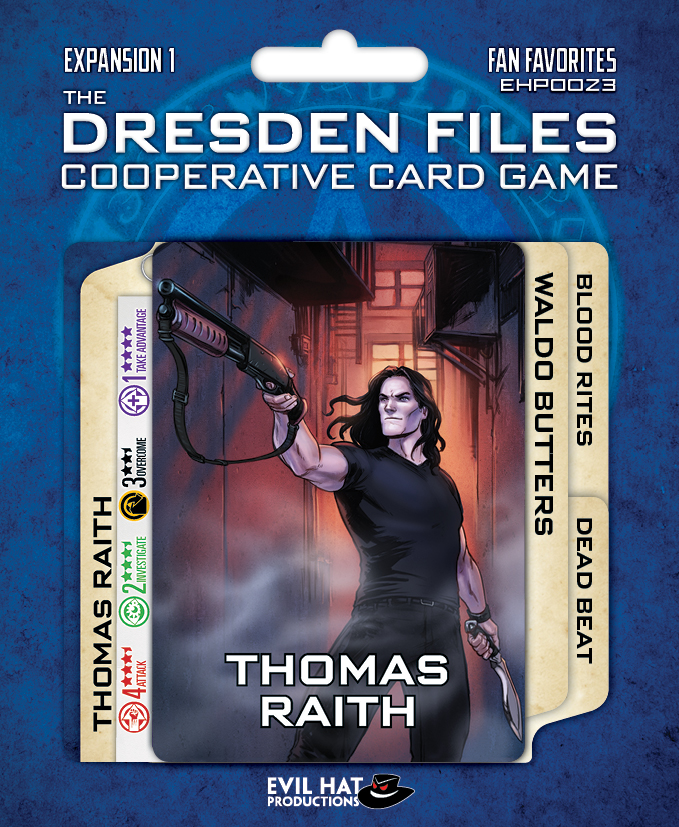 Thomas can deal lots of Hits, and removes Obstacles well.

Cards of Note. Thomas has the best Overcome card in the whole game: “Family Power” removes every Obstacle in a row. Yes, it costs 5 Fate, but if you can hit two or three Obstacles in a single turn, that’s a phenomenal time saver.

Best Suit [Attack: 14]. Thomas’s Attack cards are a relatively normal set, doing medium to good damage with a bit of extra Range on “Quick Lunge.” And then there’s “Two Blades Slash,” which Hits a Foe in each row at any Range. Add that to its 6 Hits total, and it’s obviously a great card…as long as there’s a Foe in each row.

Talent: Sawed Off Shotgun [Any Time]. +1 Hit to nearest Foe. Like Susan’s similar Talent, this one is almost always useful, because Hits to a nearby Foe should be something you can always build on. Just make sure you do! [See also Billy & Georgia: +1 Hit to furthest; Murphy: +1 Clue to furthest; Susan: +1 Clue to nearest.]

Stunt: Inner Demon [Early Game]. Draw and play a Player card. This is one of the tough Stunts to use, because it’s easy to waste it if you draw a card that’s impossible to use. That’s why it’s usually best to play early, before all the Advantages and Obstacles disappear. If you manage to have all four types of cards at near Range (1 or 2), that’s when you’re most likely to be successful. A Case and a Foe at Range 1 may be the absolutely best setup. You can improve your odds of success with this Stunt if you assess what’s still in your deck. Remember that the deck divider lists how many you have of all four types of cards. Keep it out and refer to it to see what you might draw. This card counting means that Thomas works better in a game with more players: he’ll have fewer cards left in his deck, and so he’ll know more about what he’s got left.

Team Notes. Similar to Susan’s team strategy, try not to put an invulnerable Foe to the front of a row, and if you do, get another Foe to the head of the other row. Consider giving Thomas card draws, or even better discards-and-draws, because this decreases the number of cards left in his deck, increasing his ability to assess what he’ll draw with his Stunt.

Butters can deal lots of Clues but he’s also great at taking Advantages and Obstacles at long Range.

Cards of Note. The “Research Party!” Take Advantage is quite expensive, at 5 Fate with only Range 2, but if you can let someone take a 5 Fate card back from their discard, it’s free.

Best Suit [Investigate: 14; Take Advantage: 11]. If you need Investigating, Butters is your pathologist. His “Science!” is notable because for 5 Fate it can deal a total of 6 Clues to two Cases in different rows at any range, which is the mirror of Thomas’s “Two Blades Slash.” His “Medical Examiner” also can deal piles of Clues. Butters also has a shockingly strong Take Advantage hand, which is useful if you’re in a bad situation where you must Take Advantages that are far away.

Talent: Forensic Pathologist [Any Time]. Change 1 Hit to 2 Clues. Obviously, you’re increasing the number of tokens with this Talent. Be sure to also use it to even out tokens usefully, either by getting them off a Foe you’re not going to kill or onto a Case that could be solved. [See also Ramirez: 1 Clue to 2 Hits.]

Team Notes. Add some Hits to a Foe early on, so that Butters can use his Talent to heal them and get Clues from them. As with Billy & Georgia and Murphy, consider spreading out your Clue tokens, without finishing Cases, until Butters uses his Stunt.

Stay tuned to this space for the next section on Playing Expansion #2, which will go live on Monday, August 14!